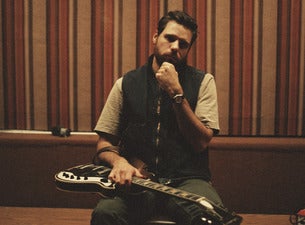 Soulful crooner Bahamas continues to wow audiences with his humble yet powerful voice and exceptional blues-guitar style. At his must-see live shows he charms audiences with ballads like "Already Yours" and melts hearts with the harmony-infused "Lost In The Light”. No matter the song or venue, Bahamas possesses a smooth, comforting vocal style that leaves new and longtime fans awestruck.One of Canada's biggest emerging artists, Bahamas displays immense talent and incredible showmanship at his live shows with powerful performances of originals like "Lost in the Light" and his rendition of the Human League's "Don't You Want Me".

Bahamas is the solo project of Toronto-based singer-songwriter Afir Jurvanen. He recorded and produced his 2009 debut Pink Strat in an isolated cabin in Ontario's countryside, the perfect setting for his reflective tunes. The album earned him a Juno Award nod the following year for Solo Roots & Traditional Album of the Year, establishing him as a hot new act on Canada's music radar. His warm, harmony-laden music shined on his 2012 follow-up Barchords, which featured the lush fan favorite "Lost In The Light". Touring alongside City and Colour, Wilco, and Elvis Costello, Bahamas earned legions of new fans and received praise for his mesmerizing live performances. With his calm, low-key tunes and carefree stage presence, it's no wonder he shares his name with a relaxing island paradise and leaves ticket buyers feeling at peace on his tours.