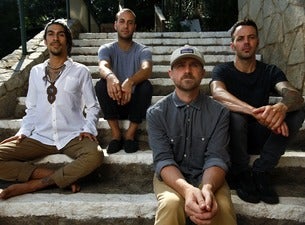 Forming in 2000 on Long Island, New York, Brand New is an alternative-punk band consisting of Jesse Lacey on vocals and guitars, Vincent Accardi on guitars and vocals, Garrett Tierney on bass, and Brian Lane on drums. They signed to Triple Crown Records and released their debut album Your Favorite Weapon in 2001, full of emotional angst and ex-girlfriend tales, before touring with the emo Dashboard Confessional, post-hardcore acts Finch and Glassjaw, alt-rock Midtown, and pop-punk bands New Found Glory and Taking Back Sunday. Their sophomore album Deja Entendu came out in 2003, featuring the singles “The Quiet Things That No One Ever Knows” and “Sic Transit Gloria... Glory Fades”, and a matured sound that became a certified gold album in the US. Derrick Sherman joined the band on guitars and keys in 2005, and the band signed with Interscope Records to release their third album The Devil and God Are Raging Inside Me in 2006. Its hit Jesus became their highest charting single in the United States. In 2009, they put out their fourth album Daisy, their most successful effort to date, reaching number six on the Billboard 200. They are currently working on their fifth studio album, and will play concerts in December 2013 on the east and west coasts where they will perform two albums in their entirety for ticket holders each night.