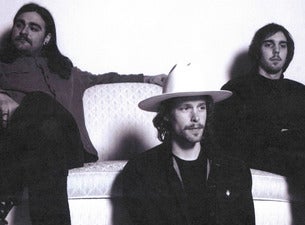 True to their name, Caamp create the sort of sing-along, stomp-along folk music that's tailor-made for secluded wooded areas, moonlit nights, and a circle of friends gathered around a fire. The duo of Taylor Meier (lead vocals, acoustic guitar) and Evan Westfall (banjo) – childhood friends from Columbus, Ohio – first started making music together as part of a high school project, before they honed their craft on the local open-mic coffeehouse circuit and stockpiled a cache of bedroom demos. In 2016, Caamp released their self-titled debut album, which set upbeat, old-timey, banjo-plucking arrangements against Meier's rugged, wounded croon – splitting the difference between the insular wood-cabin soul of early Bon Iver and the anthemic dustbowl pop of Mumford and Sons. The album's stirring standout track, "Vagabond," entered the Spotify folk-playlist ecosystem to the tune of over 10,000,000 streams, a feat nearly matched by the wistful non-album single, "Misty." As their audience expands, so too has Caamp's sound — the duo is now a trio thanks to the addition of bassist Matt Vinson, while Meier and Westfall are taking turns behind the drum kit to give their rootsy rave-ups a little extra kick. This evolution is captured on Caamp's 2018 effort, ‘Boys,' released as a complementary pair of six-song EPs that each showcase a different side of the band. On ‘Boys (Side A),' Caamp shake off some of their sepia-toned traditionalism to embrace the ragged glory of ‘70s classic rock (check out the funky Southern swagger of "Going to the Country"), while hitting more sorrowful emotional depths on "Autumn Leaves," where Neil Young-style electric guitars do battle with a trumpet in an epic closing jam. However, on more modestly scaled ‘Boys (Side B)' highlights like "Books" and "Common Man," Meier and Westfall reassert their ability to captivate listeners in the most intimate of settings.