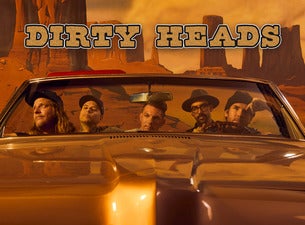 Dirty Heads have been spreading their California vibes from coast to coast ever since breaking out in 2008 with their infectious reggae-meets-rap jams. Sporting hoodies and grungy long hair, the Orange County, California natives know how to get the party started at their live shows as they tear through catchy hits like "Stand Tall" and "Lay Me Down". Dirty Heads will have fans "Driftin" along as they tour with Pepper in support of their 2014 release Sound of Change.

Reggae-rock duo Dirty Heads formed after Jared "Dirty J" Watson and Dustin "Duddy B" Bushnell bonded over their mutual love for rap music at a high school party. After the addition of three more members, the band released their mixtape The Dirty Demos in 2007. Several of the tracks from the album landed on their 2008 breakout debut Any Port In A Storm, a shining release that peaked at No. 7 on the Billboard Alternative chart and launched the band to stardom. Dirty Heads have proven to be mainstays in the reggae community thanks to their catchy tunes and thrilling live tours with the likes of 311 and Matisyahu. Their latest string of shows with Pepper will keep reggae fans’ heads bobbing and feature new material from 2014’s Sound of Change.

"I can't believe these guys aren't bigger than they are! I was so happy to see the venue packed out for this epic show! they have so much energy and they really show appreciation to the fans! CHECK 'EM OUT!!!"

"Hands down, one of the best shows I've been to! The energy that was bouncing back and forth between the Dirty Heads and the crowd was palpable. Every person in the theater was dancing and singing every word... dancing with each other and jamming hard."

"Literally amazing concert and venue. The Dirty Heads put on a great show and noticeably enjoyed having their fans there which felt good."