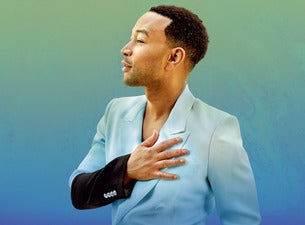 Piano virtuoso and vocal crooner John Legend has had fans awestruck ever since his 2004 debut album Get Lifted. Whether he's performing hits at the 56th Grammy Awards or collaborating with some of R&B's top acts, John Legend doesn't need much in order to deliver an exceptional live show. Often playing with just a solo grand piano, he allows his soulful vocals to be at the forefront as he treats concertgoers to hits like "Ordinary People" and "All Of Me." Legend will continue to reward fans with his smooth slow-jams on a string of intimate upcoming tour dates.

John Legend got his start in music at an early age, playing piano and performing in his church choir. While in college, Legend led the a cappella group Counterparts, but it wasn't until collaborating with Lauryn Hill on her song "Everything Is Everything" that his career started to bloom. His 2004 debut album Get Lifted was the catalyst that sparked his rise to stardom, earning gold certification and three Grammy Awards. Since then, Legend has released four acclaimed albums, earned nine Grammy Awards, and collaborated with some of music's greatest hip hop icons including Jay-Z, Mary J. Blige and the Black Eyed Peas. His 2013 album Love In The Future was met with positive reviews, peaking at No. 2 on the US Billboard R&B/Hip-Hop Albums chart and featuring the love song "All Of Me," a platinum hit in the US. Back on the road, John Legend is sure to delight fans with his romantic ballads on a string of highly anticipated tour dates.

"Not only is he an incredible entertainer, John is warm, funny, engaging, and obviously extremely intelligent. His style will make him as iconic as Sinatra and Bennett. Don't pass up a chance to see him in concert!"

"John Legend is beyond talented! His voice is even more pure and sensual live than on the CD! His presence was warm and his live instruments added to the setting. I would have paid to see this show again THE VERY NEXT DAY it was so good! Everyone should experience him perform at least once if you enjoy truly GOOD music!"

"The John Legend Concert was awesome! John Legend is talented, inspirational, and handsome too!"