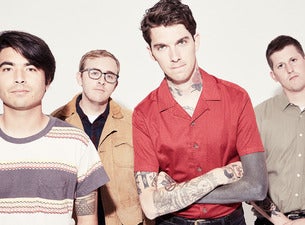 The art of the shambling, sub-three-minute punk anthem is alive and well with California punk rockers Joyce Manor. Ever since their 2010 debut the foursome have led a blazing charge to the forefront of the scene with their voltaic recordings and super-charged live shows. In 2014 and they showed no signs of slowing with the release of their third album Never Hungover Again. Whether they're tearing through early cuts like "Constant Headache" or inspiring mosh pits with new rally cries like "Catalina Fight Song", Joyce Manor always send adrenaline levels through the roof on their sonically-explosive tours.

Joyce Manor formed in Torrance, CA in 2008, taking their name from an apartment building located near lead singer Barry Johnson's house. They released a series of EPs in 2009-10 before making their self-titled album debut in 2011. The album was a hit with critics and fans alike, landing on numerous year-end lists and bringing them out on the road for extensive touring. In 2012 they released their sophomore album Of All Things I Will Soon Grow Tired, another frenetic slice of short, fast songs that earned universal acclaim despite clocking in at just over 13 minutes. In 2014 the band inked a deal with iconic punk label Epitaph for their third album Never Hungover Again, thrilling ticket buyers with the announcement of a coast-to-coast tour in support of the release.