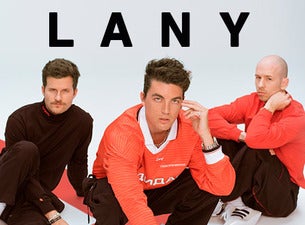 Alternative trio LANY is fast on the rise thanks to their killer combination of smooth R&B-influenced vocals, glossy '80s pop beats, and nostalgic synths and guitars. At their dance-worthy shows the band realizes their slick electronic tracks with phenomenal live musicianship, giving an energetic live feel to studio productions like "4EVER!" and "Where the Hell Are My Friends". Frontman Paul Klein is a commanding performer, delivering his emotional lyrics with unbridled passion while picking out soaring lead guitar riffs on his trusty electric. With Les Priest holding it down on bass and keys and drummer Jake Goss recreating the band's intricate drum machine beats on a real kit, LANY turns out a powerful live show that showcases the phenomenal musicianship behind their stylish pop sound.

Klein, Priest, and Goss were little more than former school friends before a fateful jam session inspired them to start writing songs together. After posting their first two tracks "Walk Away" and "Hot Lights" to Soundcloud, the group started building a fan base online. Buzz surrounding the band continued to grow throughout 2015 as they released their popular EPs I Loved You and Make Out, and in October of that year they signed with Polydor Records. LANY has opened for major acts like Halsey and Oh Wonder, and graced the pages of Wonderland and Nylon magazines. With a new EP released this summer and the forthcoming headline tour in the fall, 2016 is an exciting year for the Los Angeles based trio.