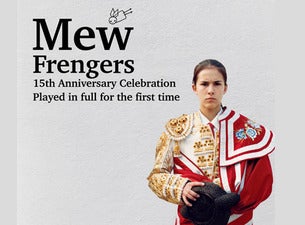 Danish band Mew mixes arena-ready hooks with dreamy atmospherics to create an infectious sound that gets everyone in attendance rocking. On miniature epics like “Am I Wry? No”, “Special”, and “Making Friends”, the band expertly moves through complex passages and doles out larger-than-life riffs that keep ticket buyers headbanging throughout the night. Lead singer Jonas Bjerre adds pristine tenor vocals and beautiful melodies to perfectly complement the pummeling power and heady atmospherics of the rest of the group. Mew consistently floors audiences around the world with their stunning light shows and flawless musicianship, offering an unparalleled aural and visual experience whenever they tour.

Formed in the Hellerup suburb of Copenhagen, Denmark, Mew has been a major factor in sowing the seeds of indie rock in their native country since 1994. After gigging around Copenhagen for a few years, the adventurous quartet of Jonas Bjerre (vocals), Johan Wohlert (bass), Silas Utke Graae Jorgensen (drums), and Bo Madsen (guitar) released their 1997 debut album A Triumph for Man. The band burst onto the international scene in 2003 with the album Frengers, winning praise for their combination of operatic production and rock and roll power. Though Wohlert left amicably in 2006 to spend more time with his growing family, the group soldiered on as a trio for 2009’s No More Stories Today…, which embraced a more dance-oriented production style. The bassist returned to the fold in time for their 2015 album + -, though guitarist Madsen subsequently departed. As a three piece, the band continues to rock arenas around the world with their trademark combination of winning hooks, stunning musicianship, and amazing showmanship.