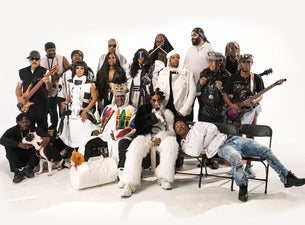 Parliament-Funkadelic has influenced generations of funk, R&B, and hip hop musicians with their infectious grooves and psychedelic stage shows. Now the world’s funkiest collective is back on tour to tear the roof off the sucker. Bandleader George Clinton masterfully conducts the vocalists through every harmonious twist as the band delves deeper and deeper into their down and dirty jams. The horns still blow, the drums still bump, and the bass still booms, but new school fans will also appreciate the hip hop and electronica flourishes this freaky fellowship has added to their signature sound. Whenever Parliament-Funkadelic hits the stage they’re sure to get ticket buyers singing along and shaking their booties with p-funk anthems like “Atomic Dog”, “Flash Light”, and “Give Up the Funk (Tear the Roof off the Sucker)”.

George Clinton (born 1941 in Kannapolis, NC) showed an intense interest in music at an early age, forming his first doo wop group, The Parliaments, when he was only 14. He then worked briefly as a staff songwriter for Motown before starting several funk collectives, most notably Parliament and Funkadelic. Both groups began to score hugely influential and successful hits like “Maggot Brain”, “Up for the Down Stroke”, and “Give Up the Funk (Tear the Roof off the Sucker)”. In the early ‘80s the groups consolidated to Parliament-Funkadelic, and they continued to wow fans in performance with outlandish, sci-fi-inspired costumes and stage props as well as dozens of band members on stage at a time. In addition to Clinton, the group has featured contributions from some of the biggest names in funk such as Bootsy Collins, Bernie Worrell, and Eddie Hazel. The band’s mind-expanding grooves and psychedelic concept albums proved hugely influential, helping them get inducted into the Rock and Roll Hall of Fame in 1997. The collective continues to soldier on, releasing First Ya Gotta Shake the Gate in 2014 and bringing their futuristic funk to audiences around the world with the same family-style stage shows.