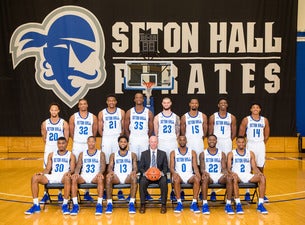 The Seton Hall Pirates, of Seton Hall University in South Orange, New Jersey, have played men's basketball since 1903. Coached since 2010 by Kevin Willard, the Pirates were runner-up in the 1989 NCAA Tournament and have won three conference titles and two regular-season conference championships. Seton Hall plays in the Prudential Center in Newark, New Jersey, which opened in 2007 and has revitalized downtown Newark. The arena currently seats 18,700 for basketball games and hosts the New Jersey Devils of the National Hockey League, as well as many other concert and sporting events, including the 2019 MTV Video Music Awards.

The first tip-off for Seton Hall was in 1903, although with no coach and no arena, the team didn't play again for another five years. The "Pirates" became the team mascot in 1931, and in 1936, the intrepid professional basketball player John "Honey" Russell took the head coach post and held it for two terms, totaling 18 years. Russell created a winning team that convinced Seton Hall to build its first sports arena, which still serves as the home for Seton Hall's women's NCAA basketball team. Russell's Pirates appeared in the National Invitational Tournament (NIT) seven times and won that title in 1953.

The Pirates have appeared in the NCAA Tournament 13 times and the NIT 17 times. Head Coach Kevin Willard, now starting his tenth season, has taken the Pirates into the NCAA first or second round for the last four seasons, including as conference tournament champion in 2016.

Since 1948, 28 Seton Hall Pirates have been drafted into the NBA, including NBA champions Bobby Wanzer, Bob Davies and Andrew Gaze. As a member of the Big East conference since the 1979-80 season, Seton Hall counts among its rivals their fellow "Catholic Seven" universities on the East Coast. The Big East is an NCAA Division I non-football multisport conference.