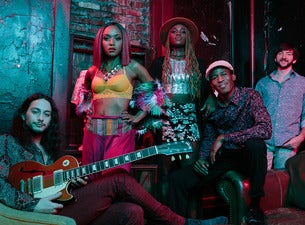 Memphis has long been one of the capitals of American music, and Southern Avenue's passion for the city's sounds couldn't be clearer. Since forming in 2015, the band has thrilled listeners both inside and outside the Memphis city limits by putting their own stamp on the soul, R&B, gospel, and blues traditions that continue to thrive in this very special place. Not only does Southern Avenue acknowledge this history in every note they play, it's also there in the band's name, which they borrowed from the street that runs from the city's eastern edge to Soulsville, the neighborhood that was the original home of Stax, one of Memphis' most fabled record labels.

It's only fitting that Southern Avenue has also found a home at Stax, the recently rejuvenated label having signed the band less than a year after its formation. Guitarist and songwriter Ori Naftaly was then still a newcomer to the city. Raised in Israel on a steady diet of American music, he originally came to compete on behalf of his country in the International Blues Challenge competition in 2013. He soon found a new set of homegrown collaborators after discovering his musical chemistry with singer Tierinii Jackson and her drummer sister Tikyra, two Memphis natives who grew up playing gospel. Completing their lineup with keyboardist Jeremy Powell, Southern Avenue swiftly earned attention for their exhilarating live sets. After earning a finalist spot in the International Blues Challenge in 2016 and signing with Stax, they cut their debut album at the city's Inside Sounds studio with producer Kevin Houston and such guests as Luther Dickinson of the North Mississippi Allstars and trumpeter Marc Franklin of the Bo-Keys. The band's power and vitality are just as clear on a hard-hitting cover of Ann Peebles' "Slipped, Tripped and Fell Over" as they are on Naftaly originals like "Love Me Right."

Released in 2017, ‘Southern Avenue' reached No. 1 on iTunes' Blues Chart and No. 6 on Billboard's Top Blues Albums Chart. Standout sets at festivals like Bonnaroo and supporting slots with the North Mississippi Allstars and JJ Grey & Mofro have served as further showcases for a young band that knows the exact location of their source of inspiration. They're eager to share all the energy they've discovered in that mighty well.