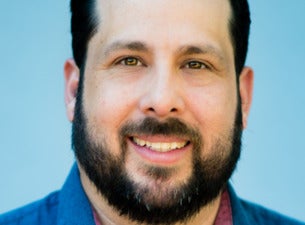 Steve Trevino always knew he wanted to do stand up from the time he told jokes in his 2nd grade talent show.  Steve got a job as a doorman at the Addison Improv and quickly earned his stripes to become the house MC, opening up for big acts traveling through the club who encouraged him to bite the bullet and move to Los Angeles.
After moving to California, he hit the road with the Three Amigos Comedy Tour starring Freddie Soto and Pablo Francisco.
He has appeared on The Late Late Show with Craig Ferguson, Comedy.TV, Comics Unleashed with Byron Allen, BET Comic View and Que Locos and at the Latino Laugh Festival, New Faces at Just For Laughs in Montreal and the Doghouse Comedy Jam in San Francisco. Steve was also a writer for and appeared on Comedy Central’s Mind Of Mencia.
During the LOL Comedy Festival, his first hour-long comedy special was filmed and will air on Showtime Oct 4th, 2012. Steve is currently developing a ½ hour comedy show about his life.