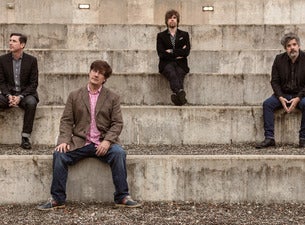 The Mountain Goats on Tour

The Mountain Goats are known first and foremost for John Darnielle's rich storytelling. He has spun heart-wrenching songs from all manner of inspirational sources, from Bible verses to photos of Judy Garland, and from fictional death metal bands to his own experiences with addiction. The band's 2019 album In League with Dragons (their 17th) draws extensively from Dungeons & Dragons, the game. Even so, none of it is novelty. Set to evocative melodies and an earnest mix of folk and rock, Mountain Goats songs are full of intimate detail, unforgettable characters, gripping narratives and intense emotion. Onstage, Darnielle's devotion to his craft comes to life in a hail of spirited strumming and vocal inflection as he's egged on by a crowd that knows every word. And it doesn't hurt that the Durham, North Carolina, outfit is rounded out by bassist Peter Hughes, drummer Jon Wurster (also of Superchunk) and Matt Douglas, who plays everything from flute to keys in order to properly soundtrack Darnielle's vision.

The Mountain Goats in Concert

The Mountain Goats officially launched in 1991 with a cassette on the beloved cult label Shrimper Records, but the band's origins run tandem to those of founder John Darnielle. His California childhood with an abusive stepdad, his youthful passion for pro wrestling, his post–high school days with a rough crowd in Oregon, his years at Pitzer inventing characters while working toward an English degree — all of it would eventually end up informing the powerful themes and complex narratives of future Mountain Goats albums. While the project's earliest releases were famously recorded on a cassette boombox (culminating in 2002's classic All Hail West Texas), Darnielle increasingly embraced the studio over time, giving records like The Life of the World to Come (2009) and Transcendental Youth (2012) a dynamic sound to match the subject matter. And while some early releases featured Darnielle alone, the band too solidified as the years went by. Still, his writing has remained central, inspiring a somewhat small but incredibly fervent audience that's included fans in high places: In 2017, acclaimed podcaster Joseph Fink started a series devoted to Darnielle's work called I Only Listen to the Mountain Goats, and in 2019, Stephen Colbert joined the band for a rendition of "This Year" on his late-night show.