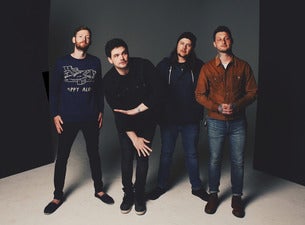 THE SPILL CANVAS IN CONCERT:

Alt rock outfit The Spill Canvas has been winning over pans for the past decade with their emotional lyrics, melodic hooks, and adrenaline-filled live performances. In concert the band delivers raw, unbridled energy while frontman Nick Thomas captivates the crowd with his boy-next-door charm and heart-on-sleeve storytelling. The Spill Canvas’s music is all about emotional connection, and their passionate performances and friendly onstage demeanor always strike a chord with fans at their live shows. Whether they’re playing a hushed acoustic rendition of “Polygraph, Right Now!” or getting ticket buyers dancing with the anthemic “All Over You”, The Spill Canvas always deliver a rousing concert experience brimming with virtuosic musicianship and heartfelt sentiment.

The Spill Canvas was formed in Sioux Falls, SD in 2002 by former Nodes of Ranvier guitarist and backup vocalist Nick Thomas. After honing his sound Thomas debuted the project in 2004 with the album Sunsets and Car Crashes, which he wrote, performed, and produced on his own. He put together a band to tour in support of the release, and in 2005 the newly formed group issued The Spill Canvas’s sophomore album One Fell Swoop. The record was a success, landing on Billboard’s Heatseekers and Independent Albums charts and earning the group a contract with Sire Records. They made their debut on the label in 2007 with No Really, I’m Fine, which peaked at No. 2 on the Heatseekers chart and spawned the popular single “All Over You”. Since then the band has toured extensively and released three more albums including 2012’s critically acclaimed Gestalt.