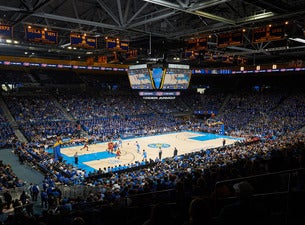 The UCLA Bruins hold a number of records in men's basketball, including 11 NCAA titles, the most of any school. Coached since 2019 by Mick Cronin, the Bruins have won four conference titles and 37 regular-season conference championships, mostly in the Pac-12, where they've been a member since 1928. UCLA plays in Pauley Pavilion in Westwood, Los Angeles, on the UCLA campus. The arena opened in 1965 and was most recently renovated in 2012. Nicknamed "New Pauley" when it reopened, the venue currently seats 13,800 and hosts other UCLA campus events, and it's slated to house wrestling and judo in the 2028 Olympic Games.

Legendary basketball coach John Wooden took the head post at UCLA in 1948 and remained until 1975, racking up multiple wins and records, including 10 NCAA titles in 12 years, seven of them consecutively. Pauley Pavilion was built during Wooden's tenure; the team played in smaller venues all over Los Angeles before that. Wooden was revered by his players for his inspirational style as well as his own basketball prowess as a Purdue Boilermaker.

UCLA has a long-running crosstown rivalry with fellow Pac-12 member University of Southern California, and its rivalry with close Pac-12 competitor the Arizona Wildcats is one of the most closely watched in men's college basketball. The Bruins' rivalry with the Notre Dame Fighting Irish goes back to the John Wooden days.