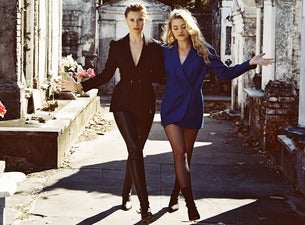 Aly & AJ celebrate their pop past and future at their high-energy concerts, which showcase singles like "Potential Breakup Song" and "Church" while also showing off the duo's wide-ranging influences, which include pop heroes like Cher and rock legends like The Cure. In 2019, Aly & AJ will tour behind their brand-new EP Sanctuary, which was introduced to the public by the plush single "Church."

Alyson and Amanda Michalka began their pop career early, getting signed as a duo by the Disney subsidiary Hollywood Records while still in their teens. Aly & AJ's debut full-length, Into the Rush, came out in 2005 and included the swaying acousti-pop track "No One" as well as an upbeat cover of The Lovin' Spoonful's 1960s hit "Do You Believe In Magic."

It was reissued the next year with bonus tracks that included "Chemicals React," a shimmery pop-rock track that was translated into Simlish, the official language of The Sims universe. After releasing a holiday-themed album later in 2006, the sisters debuted a more grown-up sound on their third album, 2007's Insomniatic, which included the peppy Top 20 hit "Potential Breakup Song" and the slinky "Like Whoa."

In 2009, the Michalkas announced they would be embracing their rockier side and changing their name to 78violet, and under that name they released a smattering of singles including the dreamy "Hothouse," which was accompanied by a short film the duo directed. The sisters went back to using the Aly & AJ name in 2015, and in 2017 they released Ten Years, embracing a more synth-pop-driven sound.

Both sisters have continued acting over the years, with Aly starring in the CW's iZombie and playing a supporting role in 2010's Easy A, AJ starring on ABC's The Goldbergs and appearing in the critically acclaimed 2018 film Support the Girls, and both starring in and co-producing the 2015 film Weepah Way for Now.