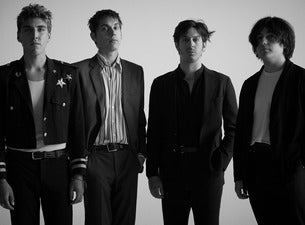 Up-and-coming LA-based indie rock outfit Bad Suns continue to generate buzz, selling out venues across the country on tour in support of their 2014 debut album Language & Perspective. The talented foursome's relaxed, retro sound conjures up images of sun-soaked California beach days, but that's not to say their music is short on energy -- the infectious groove of tracks like "Salt" and "Dancing on Quicksand" make their live show a decidedly dance-friendly affair, and the band's charisma and chemistry on stage elevate their already-catchy songs to the next level. Fans lucky enough to catch Bad Suns on their upcoming tour dates will be getting in early on indie rock's next big thing.

Bad Suns formed in Los Angeles in 2012, culling their unique sound from a variety of sources including world music, post-punk, and new wave legends like Elvis Costello and the Cure. The band had a busy 2013, performing at several CMJ showcases and opening for high-profile acts like the 1975 and Vaccines -- an impressive feat considering that they hadn't released any material yet. They made their studio debut in early 2014 with the Transpose EP, recorded by noted producer Eric Palmquist (The Mars Volta, Wavves). Their debut full-length album Language & Perspective followed a few months later, generating significant blog buzz and landing the band on Conan for their first late-night TV performance. A rising new act with talent to the gills, Bad Suns have ticket buyers eagerly awaiting their upcoming tour dates.