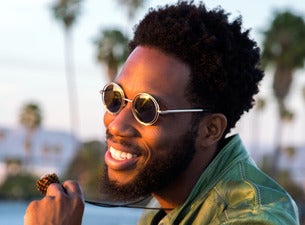 With the release of his album Art of Love in 2018, the versatile keyboardist, singer, songwriter and arranger Cory Henry, who's toured with superstars ranging from Bruce Springsteen to the Roots to Boyz II Men, finally takes center stage. Here Henry fronts the Funk Apostles, a collective comprising veteran instrumentalists and backing vocalists who've recorded with the likes of Booker T. Jones, Aretha Franklin and Ludacris, not to mention Snarky Puppy, the New York–based modern jazz crusaders that gave Henry his greatest push yet. It's a true creative collaboration with Henry at the heart, providing passionate and poignant vocals and wailing on his signature Hammond B3 organ, plus clavinet, piano and a host of digital and analog synths. The music is simultaneously classic and forward-looking, reverent of giants like Herbie Hancock, Prince and Curtis Mayfield while forging a singular path forward through simmering acid-jazz, neck-snapping R&B and tender-hearted pop. The sound is soul and the feeling is real.

As powerful as Art of Love is, Henry and the Funk Apostles truly shine when they live up to their moniker and deliver their sound live, directly to the people. Part gospel revival, part jazz jamboree, part neo-soul social hour, a Funk Apostles show is all about joyful participation, absorbing and reflecting the energy bouncing between band and audience. The crew is touring through Europe this winter and heading to the Cape Town International Jazz Festival in South Africa in March and a slot opening for Los Angeles nu-jazz innovators Vulfpeck at Red Rocks in May.