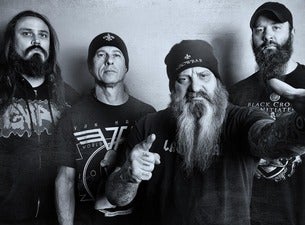 Sludge metal powerhouse Crowbar has been melting faces off with their bludgeoning brand of doom for more than a decade. At the quartet's decibel-shattering live shows, the ferocious growl of frontman Kirk Windstein sits perfectly atop the band's technically precise onslaught of metal mayhem. This isn't music for the faint of heart -- from "I Am Forever" to "Burn Your World", Crowbar delivers their weighty material with an intensity and volume that fans won't soon forget.

Crowbar formed in New Orleans in 1989, performing music under various monikers including Wrequiem and The Slugs before settling on their current name in 1991. Their debut album failed to garner much attention, but their self-titled 1993 sophomore album generated significant buzz after appearing on the MTV programs Headbanger's Ball and Beavis and Butthead. The exposure landed the band on a major tour with Pantera, and their searing performances on the road further boosted their reputation. A string of albums followed in the '90s and '00s including 1996's Broken Glass and 2005's Lifesblood for the Downtrodden, which featured Pantera bassist Rex Brown. The band released their tenth album Symmetry In Black in 2014, and they continue to awe ticket buyers with ruthless performances on tour.