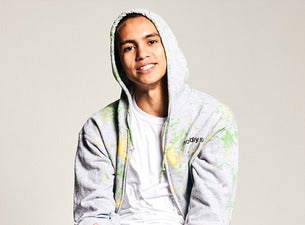 Floridian singer-songwriter Dominic Fike can do it all on stage — strum catchy indie-pop gems, belt out soulful shouts, spit rapid-fire raps, take mellow moments on the Rhodes keyboard and even bust out the occasional backflip. Leading his small band, the viral sensation mixes bedroom pop intimacy with arena rock bravado and hip-hop sensibility. Though known for alterna-pop hit "3 Nights," he will occasionally free himself from his guitar to hold the microphone and command the crowd with rapid-fire raps or an impassioned croon. Fike has played the Made in America festival, Georgia's Music Midtown and Los Angeles' Hammer Museum. A wildly fast rise meant Fike headlined his own Rain or Shine tour in 2019 having released only a six-song EP and a handful of singles. That year he was set to hit the West Coast, Canada, Australia, Europe and more.

In less than two years, genre-crossing auteur Dominic Fike went from a 21-year-old uploading songs to SoundCloud to major-label artist with the No.1 song on the Billboard Alternative Songs chart. Emerging from Naples, Florida, Fike grew up listening to his mom's Usher and Lil Kim records. He was a guitar-playing fan of the Red Hot Chili Peppers, Blink-182 and Jack Johnson, but found himself freestyle rapping with a group of friends known as the Backhouse collective. In December of 2017, he uploaded the 14-minute EP Don't Forget About Me, Demos to SoundCloud, full of breezy acoustic guitars, night-dwelling hooks and fervent raps. It slowly gained interest, culminating in a much-ballyhooed major-label bidding war: Columbia ultimately re-released the EP on streaming in 2018 and vinyl in 2019. The opening track "3 Nights" became an international hit, reaching the Top 10 in the U.K., Australia, Ireland and elsewhere. The album was followed by three more singles in 2019: "Açaí Bowl," "Rollerblades" and "Phone Numbers."