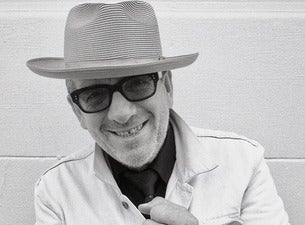 ELVIS COSTELLO & THE IMPOSTERS IN CONCERT:

From punk rock to symphonic pop, Elvis Costello has explored seemingly endless subgenres of modern music with his signature flare over the past 40 years. With his exhaustive vocabulary and cheeky wordplay, Costello’s rocking-wordsmith style still delights fans in concert, and his catchy melodies have turned him into a household name. While fans line up to hear hits like “Pump It Up”, “Watching the Detectives”, and “Everyday I Write the Book”, the true thrill for ticket buyers comes from his knack of reinventing his songs in concert—and that’s where his talented backing band comes in. The Imposters features longtime collaborators Steve Nieve (keyboard) and Pete Thomas (drums), who are dialed in to the capricious whims of their iconoclastic frontman and support him brilliantly wherever his muse leads him. Even if the styles change, Elvis Costello & The Imposters always nail the familiar sentiments of their classic songs, and audiences can’t wait to hear the band put a fresh spin on their tunes any time they perform.

Declan MacManus adopted the stage name Elvis Costello as a nod to both The King and his father, a band leader who recorded under the name Ross Costello. He made his debut with the 1977 single “Less than Zero” before releasing his first album My Aim Is True later that year. Though he was part of England’s initial punk rock scene, he and his backing band The Attractions transitioned into new wave with hits like “Oliver’s Army”, “Everyday I Write the Book”, and “Radio, Radio”. After years of tensions between Costello and bassist Bruce Thomas, the singer disbanded The Attractions following their 1996 tour. Towards the end of ‘99, he invited former Attractions members Pete Thomas (drums) and Steve Nieve (keyboards) to join his new backing group The Imposters. Elvis Costello & The Imposters have remained together ever since, releasing critically praised albums like 2008’s Momofuku and keeping audiences happy in concert with their countless hits.