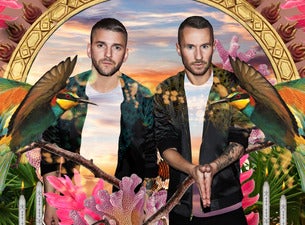 Galantis combines the dance-meets-pop genius of two Swedish super-producers: Christian "Bloodshy" Karlsson (a member of Miike Snow who's worked with Britney Spears, Katy Perry and Madonna to name a few) and Linus Eklöw, aka Style of Eye, (cowriter of Icona Pop's "I Love It" with tracks on such respected electronic labels as OWSLA, Fool's Gold and Dirtybird). It should come as no surprise that these two know how to work a crowd. Sure, they're known to fire up the flame cannons, program wild visuals, twist knobs with abandon and bang on a long line of physical drums during their shows. But with Galantis, it's all about the energy and emotion in the music itself as the superduo's studio expertise comes to mega vivid, incredibly loud life. They cycle through upbeat styles, mixing and remixing their melodically blessed hits, but when the drop comes, it's less likely to be a bass blowout than an epic sing-along. Their mastery of mood has been on display since they played their first gig at Coachella in 2014.

Both members of Galantis began making music as children growing up in Sweden. Karlsson's first loves were punk rock and hip-hop, which he discovered via skateboarding, while Eklöw's path began with listening to soul and jazz at home and starting to play drums at age 10. The former joined bands and started producing with an old friend (they'd later cowrite Spears' "Toxic" as Bloodshy & Avant). The latter kicked off his career DJing drum ‘n' bass at school dances, then became a Stockholm underground mainstay. After crossing paths in Karlsson's Robotberget studio, the pair bonded over the idea of fusing EDM's huge energy with pop's emotional pull. They built their own studio on an island in the Baltic Sea and found their approach: rather than start with a beat, they write on guitar or piano, keeping the song spare until they're sure they love it, and only then add the electronic flourishes. The superduo's LPs — 2015's Pharmacy and 2017's The Aviary — are carefully composed, dynamic mixtures of melancholy and mania, house beats and bright vocals, music theory and visceral thump. All of that is contained in Galantis' singles, too, which include collaborations with rock-oriented acts like OneRepublic and Passion Pit.