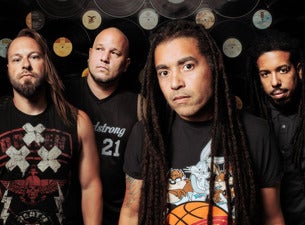 Florida five-piece Nonpoint has been shaking fans to the core with their blistering brand of nu metal since 1997. The band brings a whirlwind of energy to the stage at their live show, thrashing through hard-hitting yet melodic favorites like "Bullet With a Name" and "Alive and Kicking" with a passion and energy that drive their emotional lyrics home. From scorching guitar riffs and hammering drums to frontman Elias Soriano's soaring vocals, Nonpoint deliver an adrenaline-filled concert experience that both energizes and impresses, leaving fans rocked and ready for more.

Nonpoint formed in Fort Lauderdale in 1997 and quickly made a splash on the budding South Florida metal scene with their intense sound and captivating stage presence. After self-releasing their first album and releasing a sophomore album on the now-defunct Jugular Records, the band made their major label debut on MCA Records in 2000 with the Statement LP. The record put them on the national radar, earning them their first charting single with "What a Day" and drawing them out for touring alongside bigger rock acts like Fuel and Taproot. They followed up in 2002 with Development, an acclaimed album that landed at No. 52 on the Billboard 200 and led to tour dates with Filter, Papa Roach, and Sunset Black. The band continued to climb the charts throughout the late '00s with various releases, and in 2014 they scored their highest position yet when their eighth studio album The Return peaked at No. 3 on Billboard's alternative chart. Since then they've continued to wow fans with electrifying performances across the country, building excitement among ticket buyers for their upcoming tour dates.