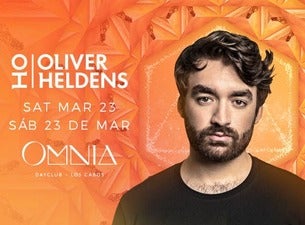 Dutch DJ and producer Oliver Heldens stormed the UK charts in 2014 with his platinum-selling single "Gecko (Overdrive)", and now he's bringing his futuristic brand of house music stateside. A skilled selector and beatmaker who's garnered praise from EDM tastemakers like Tiesto and Pete Tong, Heldens always jumpstarts the party with his body-rocking blend of original tracks and slick remixes. Bangers like "Last All Night (Koala)" and "Bunnydance" have lit up festivals across Europe, and they're sure to induce plenty of euphoria on this side of the pond too. Late night revelers looking for a nonstop dance party won't want to miss Heldens in action as he creates tension with dramatic builds and then drops the beat for the ultimate release.

Rotterdam-born Oliver Heldens started Djing and producing music in his teens, spinning parties and creating beats using music software like FruityLoops. After releasing a few 12" singles on Spinnin' Records in 2013 he signed to TiÎsto's Musical Freedom label and released the track "Gecko". The single made big waves in 2014, garnering "Essential New Tune" status from EDM tastemaker Pete Tong and ultimately reaching No. 1 on the UK Singles Chart thanks to a vocal re-edit featuring singer Becky Hill. With his track firmly atop the charts, Heldens was a staple of the 2014 summer festival season, delivering epic sets at major parties like EDC, Tomorrowland, and Creamfields. He finished out the year with another Top 5 hit on the UK Singles Chart with "Last All Night (Koala)", a deep house club anthem featuring vocals from British singer KStewart. After landing at No. 12 on DJ Mag's Top 100 in 2015, Heldens returned to the UK charts in 2016 with "The Right Song (Wombass)", a collaboration with TiÎsto and Natalie La Rose.