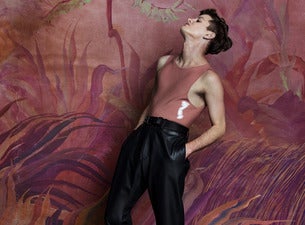 Chamber pop virtuoso Perfume Genius continues to push the envelope with his vulnerable yet powerful vocals, outré personal style, and intimate live performances. Whether he's accompanied by a backing band or going it solo with his keyboard, he always delivers a cathartic, unguarded live show that highlights the gravitas of his subject matter yet remains cautiously hopeful in its melodic flourishes. Fans love Perfume Genius for his grit and emotion, and they'll get plenty of both as he performs poignant renditions of favorites like "Dark Parts" and "Floating Sit" on tour.

Seattle-based Perfume Genius, a.k.a. Mike Hadreas, began composing music in 2008 after relocating from New York to the Pacific Northwest. The demos he posted to MySpace attracted the attention of revered indie imprint Matador Records, and in 2010 the label released his debut album Learning. The release was a hit with critics, while its sober subject matter and uncluttered arrangements andhad an even bigger emotional resonance with fans. He followed up in 2012 with Put Your Back N 2 It, an ambitious effort that continued in the same vein. Critics took note -- the album was awarded Best New Music by Pitchfork, and it appeared on numerous year-end lists. With his highly anticipated third album Too Bright hitting shelves in 2014, Perfume Genius has fans eagerly awaiting his upcoming tour dates.