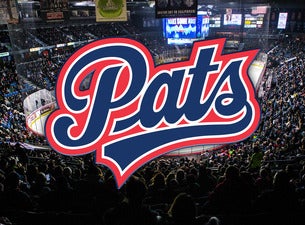 About The Regina Pats

The oldest continuously operating team in junior hockey, the Regina Pats have called Saskatchewan's capital home since 1917, winning four Memorial Cups (1925, 1928, 1930, and 1974), the 1974 and 1980 WHL titles, and countless other championships in over the last 100 years. The Pats' name stems from the Victorian era, as they were named in honor of Princess Patricia of Connaught, the granddaughter of Queen Victoria (Princess Patricia father, Prince Arthur, was Governor General of Canada at the time). To this day, the Pats wear the emblem of the Princess Patricia's Canadian Light Infantry (PPCLI), which was founded during the First World War. During the Pats' 1927-28 season they were known as the Regina Monarchs after merging with another team, but except for that one year (in which they won the Memorial Cup) they continue to honour Patricia of Connaught.

Many notable players have suited up for the Pats over the past century. Glenn "Chico" Resch and Clark Gillies, who both contributed to the New York Islanders' success in the early 1980s, played for the Pats in the early '70s. Hockey Hall of Famer Al MacInnis played two games for the Pats before spending the majority of his junior career in the OHL, while legendary Michigan head coach Red Berenson played parts of three seasons with the Pats before embarking on a long career as an NHL player and a pro and college coach. Three Pats players have won the CHL Player of the Year trophy, including goalie Ed Staniowski as the first recipient in 1975, future NHL Draft first overall pick Doug Wickenheiser in 1980, and Jordan Eberle in 2010.

The Pats play at the recently renovated Brandt Centre, which hosted Skate Canada 2017 and the 2018 Memorial Cup, and seats 6,484 for hockey. They play in the East Division of the Western Hockey League's Eastern Conference, against such rivals as the Brandon Wheat Kings, Moose Jaw Warriors, Prince Albert Raiders, Saskatoon Blades, and Swift Current Broncos.