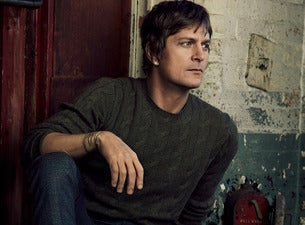 The impassioned voice behind post-grunge chart-topper Matchbox Twenty, Rob Thomas has also enjoyed a successful solo career kick-started by a collaboration with the legendary Carlos Santana. The singer-songwriter typically jumps between both of these musical worlds on tour, performing his own more polished pop-oriented material alongside new interpretations of his band's most-cherished emotive rock hits, while also showcasing his unique dance moves and compelling storytelling abilities. There have been plenty of opportunities to see Rob Thomas live over the years. He has embarked on headline treks to support all of his studio efforts, as well as a Special and Intimate Performance tour in 2014 and a series of joint shows with the Counting Crows in 2016.

Born in Landstuhl, West Germany, in 1972, Rob Thomas moved with his family to the US as a baby and lived a relatively nomadic childhood before settling in Orlando aged 11. Inspired by the country music of Merle Haggard and Johnny Cash, he began penning songs and performing in various cover bands as a teen, and in 1993 formed Tabitha's Secret, the group which would eventually evolve into Matchbox Twenty. As the frontman and chief songwriter, Thomas guided the band to phenomenal success, with 1996 debut, Yourself or Someone Like You, selling 12 million copies, and 2000 sophomore, Mad Season, spawning a number one single, "Bent." But Thomas' crowning glory arrived in 1999 when he teamed up with Carlos Santana on "Smooth," the three-time Grammy winning chart-topper which was later announced as the second-biggest US hit of the 20th century. Thomas launched his solo career proper in 2005 with Top 10 single "Lonely No More" and its parent album …Something to Be, a surprisingly poppier affair which drew comparisons with Justin Timberlake. Thomas spent the next decade alternating between Matchbox Twenty and his solo career. In 2012 he released album North with Matchbox Twenty. In 2009 he released his second solo album, C radlesong, followed by The Great Unknown in 2015. Fans can keep up to date with all things Rob Thomas by following him on Facebook, Twitter and Instagram. Note to editor: What is the experience of seeing Rob Thomas perform live? See copy below in the first paragraph The singer-songwriter typically jumps between both of these musical worlds on tour, performing his own more polished pop-oriented material alongside new interpretations of his band's most-cherished emotive rock hits, while also showcasing his unique dance moves and compelling storytelling abilities.