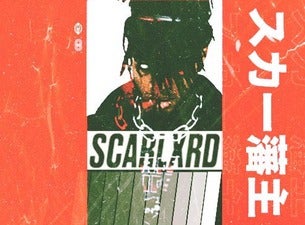 The U.K.'s vibrant hip-hop community continually spawns forward-thinking subgenres and rappers. In recent years, that's included Marius Listhrop, who records confrontational music under the name Scarlxrd. In fact, his approach is frequently dubbed "trap metal," owing to the music's combination of clashing guitars and a gravelly delivery over trap beats and production that sounds like a Tim Burton movie soundtrack. As his career has progressed, his music has only become heavier, between the lyrical content and the instrumentation. For example, 2018's "SX SAD" features distorted vocals over nightmarish electronic music, while that year's full-length, DXXM, has a metallic tint that sometimes even nods to Rage Against the Machine.

Prior to assuming the Scarlxrd moniker, Listhrop was a fresh-faced YouTube star going by the name Mazzi Maz and creating videos full of lighthearted comedy. In 2014, however, he pivoted and started fronting an aggressive band called Myth City that touched on Deftones-esque hard rock and snarling nu-metal. That music segued directly into Listhrop's first work with Scarlxrd, the swaggering 2016 single "Girlfriend" and two full-lengths: a self-titled effort and one titled Rxse. As his confidence grew, so did his look; notably, he took to sporting a black mask, which he's said was inspired by the anime Tokyo Ghoul.

Live, Scarlxrd possesses a commanding presence, in part because of his animated DJ, Jacky P, but mostly because he's a rapid-fire rapper who draws on his rock band days to engage the crowd. He's frequently found running around the stage, sometimes headbanging and other times screaming into the mic at the edge of the stage. In a nod to his live prowess, Scarlxrd was chosen to open for Bring Me the Horizon at the May 2019 All Points East festival in London and also earned a spot in the lineup of North Carolina's Epicenter Festival.