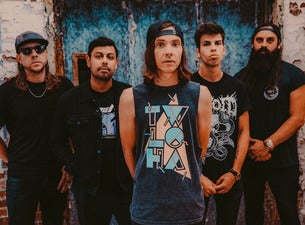 THE RED JUMPSUIT APPARATUS IN CONCERT:

Dynamic Florida pop-punk band the Red Jumpsuit Apparatus have kept fans on their toes with their varying musical style since their arrival on the rock scene in 2003. Whether frontman Ronnie Winters is growling heavily into the mic on "Face Down" or revealing the band's softer side on "My Guardian Angel," the Red Jumpsuit Apparatus never fails to disappoint fans with their adrenalin-filled live shows. 2014 marks the release of the band's fourth studio album as they treat fans to a preview of new songs on a string of summer tour dates.

The Red Jumpsuit Apparatus is the brainchild of friends Ronnie Winter and Duke Kitchens, who began writing songs together after realizing their creative chemistry in their high school music class. The addition of new members and the creation of an official band name led to their 2006 debut album Don't You Fake It, which was certified Gold by the RIAA and featured a string of hits. The album's success led to shows with major players like Thirty Seconds to Mars and Taking Back Sunday as well as several headlining tours of their own, earning them a cult following along the way. Since then, the band has released two more full-length albums, 2008's Lonely Road and 2011's Am I the Enemy, and celebrated their ten year anniversary with the EP Et Tu, Brute? in 2013. The Red Jumpsuit Apparatus will hit the road again in 2014 for several shows to promote their highly anticipated fourth album Four.