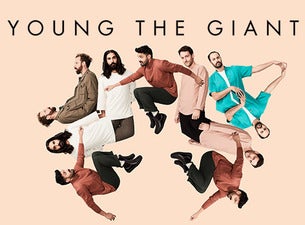 YOUNG THE GIANT IN CONCERT:

Young the Giant live up to their name with a youthful exuberance and a larger-than-life sound that blends intelligent pop hooks with alternative rock quirks. When he’s not headbanging along to the instrumental breaks, charismatic frontman Sameer Gadhia croons his catchy melodies and brings his songs to life with inimitable energy. While he provides the band's soulful pop foundation, dueling guitarists Eric Cannata and Jacob Tilley envelope listeners in the ambient soundscapes that they conjure with their echoing riffs. Bassist Payam Doostzadeh and drummer Francois Comtois hammer out driving rhythms to bring a furious rock edge to the band’s sound. In concert, the group combines all these elements to hypercharge already electric hits like “Cough Syrup”, “My Body”, and “It’s About Time”. Ticket buyers are encouraged to sing along to the catchy catharsis as Young the Giant brings their fun-fueled madness to cities across North America.

Before they were known as Young the Giant, indie darlings The Jakes were an up-and-coming act in Irvine, CA, where their 2008 EP Shake My Hand became an underground smash. After a roster shakeup and tours with Minus the Bear and Neon Trees, the band decided to change their name to Young the Giant in 2009. Their self-titled  debut album became a breakout success the following year behind the singles “My Body”, “Cough Syrup”, and “Apartment”. Among other praise, the album was named the third best rock record of the year by Amazon.com. Their 2014 sophomore effort Mind Over Matter further cemented the group as indie hit-makers with the success of singles “It’s About Time” and “Crystallized”. The band remains a headlining heavyweight as well as an in-demand fixture at festivals based on the power and enthusiasm of their live shows.