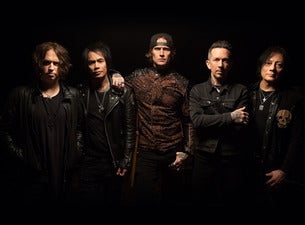 The sex, drugs, & rock and roll ethos of legendary hard rock bands like Motley Crue and Van Halen is alive and well in the new millennium with Buckcherry. Josh Todd and company may have taken a few years off in the '00s, but 2013's Confessions displayed the same uncompromising dedication to chasing skirt and partying hard the band has become known for. At their 2013 shows, Buckcherry floored fans with adrenaline-filled sets of hits like "Lit Up" and "Sorry," building anticipation for more shenanigans on their 2014 tour dates.

Formed in Anaheim, California, in 1995, the band got their start under the name Sparrow before switching to Buckcherry for their self-titled 1999 debut. The album peaked at No. 1 on the Billboard Heatseakers Albums chart, spawning several hits and landing the band an opening slot on Lenny Kravitz's 1999 Freedom Tour. After going on hiatus in 2002, the band reformed for 2006 album 15, racking up several more hits including the platinum-selling singles "Sorry" and "Crazy B*tch." In addition to a stint on Motley Crue's Crue Fest tour in 2008, Buckcherry opened for KISS on their 2009/10 North American tour, further adding to their cred as heirs to the hard rock throne.

"Buckcherry always puts on a great show. If you have not seen them live and you love rock & roll they are a must to see."

"Good old-fashioned kickass rock and roll. Josh Todd rocked the stage and his vocals are incredible."

"The guys were great!!! The sound was really clear - vocals was balanced between guitars and drums. Talked with some band members later after the show and it is nice to know that they still love doing shows and are not just 'performing.'"