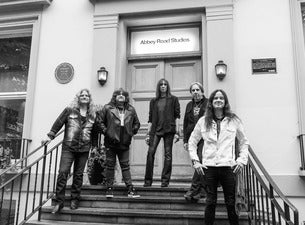 Nearly 30 years after their debut album, long-haired hard rockers Tesla are still bringing the goods to their legendary live shows.  Taking the stage with an energy that belies their veteran status, Tesla thrilled fans on their Lazy Days, Crazy Nights tour in 2013, performing marathon sets of hits like "Love Song" and "What You Give." With a highly anticipated new album in the works for 2014, Tesla is well-oiled and ready to deliver another electric round of performances on the road.

Formed in Sacramento in the early '80s, Tesla spent several years trying to appeal to record labels with a poppy sound before a sage piece of advice from a Geffen exec led them to return to their roots in hard rock. The result was 1986 debut full-length Mechanical Resonance, an impressive collection of muscular rock songs that landed in the Top 40 and went on to sell platinum. 1989 Sophomore album The Great Radio Controversy further boosted the band's growing popularity with '80s power ballad "Love Song," a Top 10 hit on the Billboard Hot 100. After a hiatus in the late '90s, Tesla made a triumphant return to the stage in 2000 with a passionate reunion show in their hometown of Sacramento, paving the way for their renewed popularity both in the studio and on the road.

"I am so happy to see that these guys are still rocking their asses off. The band is so tight and they played high powered songs all night without stopping. This show is a must see if you like to rock out."

"From the first note to the last note it was GREAT! I enjoyed listening and singing along with the band. Seeing them in person is a lot better than listening on album or cd."

"We enjoyed every minute of this show. Tesla sounded unbelievable and they played all their popular songs as well as a couple new ones from their upcoming album."