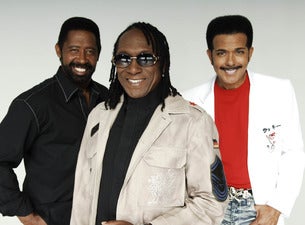 The Commodores are one of the most iconic funk and soul bands to ever bust a groove, riding the rhythm section since 1968 and remaining musical innovators to this day. In concert, Walter Orange, William “WAK” King and J.D. Nicholas take audiences on a tour through the roots of funky soul. "Machine Gun," a grooving instrumental from their debut album, feels as fresh today as the day the tracks were laid down. Orange’s instantly recognizable voice reminds everyone that she's a "Brick House," one of the band's most recognizable hit singles.

The Commodores first met at Tuskegee Institute in Alabama. Four years later, they were signed to Motown Records after opening on tour for the Jackson 5. They focused on their own unique brand of Southern funk, rising to the top with chart-toppers including “Slippery When Wet” and “Just to Be Close to You.” Now, backed by their five-piece band, The Mean Machine, The Commodores share their unique vocal stylings through even more of their number one hits, including “Three Times a Lady” and “Still,” two more of their seven songs that have topped the US R&B charts. “Nightshift” also garnered the band a Grammy award. From a performing point of view, Orange, King and Nicholas simply can’t be slowed down. They know they have soul. They were 2003 inductees in the Vocal Group Hall of Fame, and have earned an American Music Award. More than anything, however, The Commodores leave it all on stage every time they play, because they know that they are able to write their own ticket through their music.