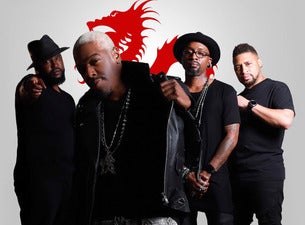 Dru Hill is back! This smooth and sexy R&B quartet became a household name back in the 90s, thanks to hits like “How Deep Is Your Love” and the solo career of Dru Hill member Sisqo. Now, with a new album coming in 2014, and a successful live show, a whole new generation is falling for Dru Hill. In concerts, they still show off the signature mix of cool R&B and hip-hop sung in flawless four-part harmony, with original members Sisqo, Jazz, and Nokio joined by new addition Tao. Their set includes a mix of old favorites and new tracks, like “Love MD," off their 2010 album "InDRUpendence Day."

Live shows have always shown Dru Hill at their best, ever since they were snapped up by Island Records when a scout saw them singing for crowds in a Baltimore-area fudge shop. After being snapped up, their 1996 self-titled debut album went platinum and spawned their Top 5 debut “Tell Me” and No. 1 hits "In My Bed” and "Never Make a Promise.” They soon became one the hottest tickets around, distinguishing themselves from many of the '90s era boy bands by writing their own songs, producing their own records, and displaying serious singing talent. Their second album, "Enter The Dru," went double-platinum, but the band’s bleach-blonde dancing machine Sisqo was attracting attention all on his own. Dru Hill parted ways for a while, but now they’re back and eager to prove themselves once more. "InDRUpendence Day" quickly climbed up the Billboard top 30, and now the band will be touring the US throughout 2014 and getting ready to release its upcoming album, "The Second Coming."