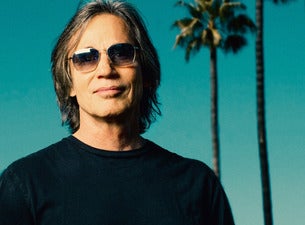 One of the true legends of the 20th century American singer-songwriter movement, the great Jackson Browne has been producing soulful, catchy music for over 40 productive years. His live performances are intimate, memorable occasions, treating ticket buyers to gorgeous melodies and introspective lyrics that fill the room and the hearts of concert-goers. Jackson Browne tours also include some beautiful sing-alongs, particularly for the favorite, "Load Out/Stay," a tribute to the concert-goers and the roadies.

The future member of the Rock and Roll Hall of Fame started off his career in the folk-music hotbed of Greenwich Village, earning raves for his work with the Nitty Gritty Dirt Band before embarking on a solo career. His self-titled first album, "Jackson Browne," produced his first hit, "Doctor My Eyes," and he followed up the record with the acclaimed albums, "For Everyman," "Late for the Sky" and "The Pretender." His 1977 album, "Running on Empty," was a massive hit, featuring a successful single in the title track (famously heard in "Forrest Gump") and 1980's "Hold Out" reached No. 1 on the charts. His 1980s albums, "Lives in the Balance" and "World in Motion," explored more political themes, and he maintained commercial and critical relevance with the 1990s releases "I'm Alive" and "Looking East." More recently, Browne released the excellent album, "The Naked Ride Home," in 2002, and he had another critical hit with the politically charged 2008 album, "Time the Conqueror." A member of both the Songwriters Hall of Fame and the Rock and Roll Hall of Fame, Browne has proved to be one of the most enduring and acclaimed artists of the 20th century, and his albums and live performances promise to entertain millions well into the 21st century.