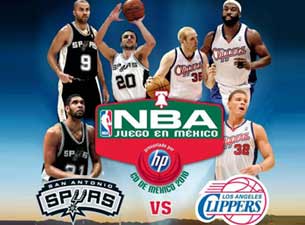 The San Antonio Spurs have called the AT&T Center home since 2002. The AT&T Center is the premier entertainment venue in South Texas. Operated by Spurs Sports & Entertainment and home to the San Antonio Spurs (NBA), the San Antonio Rampage (AHL), and the San Antonio Stock Show & Rodeo, the building has entertained millions of guests. The building offers diverse events to the San Antonio community and all of South Texas thanks in part to its various seating capabilities, building configurations, curtaining system, and technology upgrades. Aerosmith, Justin Timberlake, The Weeknd, Bon Jovi, Cirque du Soleil, The Eagles, Vicente Fernandez, Lady Gaga, Billy Joel, Elton John, Madonna, Metallica, Red Hot Chili Peppers, Rihanna, The Rolling Stones, Shakira, Taylor Swift, Trans-Siberian Orchestra and WWE are just a sampling of the acts that have performed at the AT&T Center.

In the summer of 1973, a group of local investors leased the Dallas Chaparrals and relocated the team to San Antonio. Midway through their first season in the Alamo City, the group purchased the team outright, and the Spurs have been a mainstay in San Antonio culture ever since. The Silver and Black played their first three seasons in the ABA before joining the NBA in the summer of 1976, along with the Nets, Nuggets, and Pacers.

The Spurs are led by head coach Gregg Popovich, who has been at the helm for the past 22 seasons. The longest-tenured coach with the same team in all four major professional sports, Popovich holds the third-best winning percentage in NBA history (.689, 1,197-541). His 1,197 victories with the Spurs rank first all-time in NBA history for most wins with one team. Popovich's 166 playoff wins rank third in NBA history (behind Phil Jackson and Pat Riley) and his playoff career winning percentage of .610 (152-94) is the fourth-best in league history.