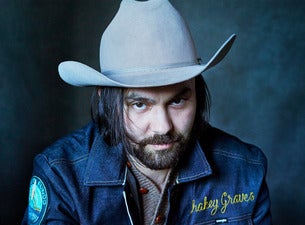 Stripped-down folk rock act Shakey Graves has long been a favorite in his native city of Austin, but lately he's been making waves far beyond the borders of the Lone Star State. Taking the stage with a jerry-rigged drum kit that includes a suitcase, Shakey Graves, a.k.a. Alejandro Rose Garcia, captivates audiences with a variety of idiosyncratic techniques including unexpected tempo changes, drastic register shifts, and his off-kilter lyric sensibility. Whether he's crooning on "Built to Roam" or creating an intricate percussion backdrop on "Roll the Bones", Shakey Graves always satisfies on his unforgettable tours.

Shakey Graves is the one-man band of Alejandro Rose Garcia, an actor turned singer-songwriter who launched the project in 2009 while living in Los Angeles. After cutting his teeth in LA's eclectic underground folk scene he returned to his hometown of Austin, TX, where he quickly became a huge local draw with his unique performances at venues on and around artsy Annie Street. In 2011 he released Roll the Bones, wowing critics with his creative, lo-fi take on traditional folk and receiving a nod from NPR, which named him one of ten artists fans "should've known in 2012." He followed up with the Donor Blues EP in 2012, a bluesy slice of poetic folk that drew another round of praise. As renowned for his one-man performances as he is for his recordings, Shakey Graves continues to stun on his must-see tours.