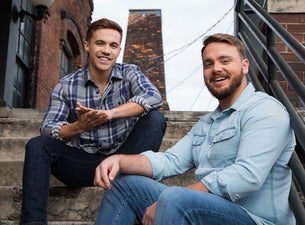 The country duo Muscadine Bloodline are masters of dynamics. They can belt out a big, bold, country-rocking anthem like "Movin' On" one minute, and the next they can bring things down to a whisper with a vulnerable, soul-baring ballad like "Enemy."

Whether they're getting the audience worked up to a fever pitch with a raucous roof-raiser or letting things simmer, there's always one common thread running through every Muscadine Bloodline performance. The organically intertwined vocals of Charlie Muncaster and Gary Stanton are at the center of the Alabama duo's sound, as they blend country, rock, pop, and R&B influences for a style that sets itself apart in the modern country scene, stopping folks in their tracks and commanding undivided attention.

Charlie Muncaster and Gary Stanton both hail from Mobile, Alabama, where they had solo careers before making the move to Nashville. Like so many great artists before them, the pair decided to forge a new country career in Music City, joining forces under the Muscadine Bloodline banner in 2016.

It didn't take long for the duo to make themselves known, releasing a string of singles and a self-titled debut EP the next year, followed by the EP Movin' On in 2018. From the beginning, it was clear that Muncaster and Stanton's seamless vocal blend was the most striking element of the Muscadine Bloodline sound, mixing downhome country twang with a sweet soulfulness.

Muncaster and Stanton's backgrounds include everything from rock 'n' roll to rap, and the MB repertoire ended up being just as eclectic. In addition to a catalog of original tunes ranging from the anthemic to the angelic, Muscadine Bloodline has been known to bust out cover tunes that run the gamut — from the George Jones honky-tonk chestnut "White Lightning" to The Steve Miller Band's 1970s classic-rock standard "The Joker."

Whether they're singing their songs in a roadhouse atmosphere or gracing the stage of the Grand Ole Opry, where they appeared for the first time in 2018, Muncaster and Stanton know how to make their music connect.