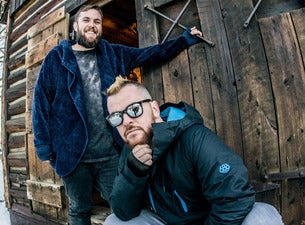 THE FLOOZIES IN CONCERT:

The siblings behind electro-funk duo The Floozies always get the party started at their live shows with a dance-worthy combination of red-hot beats, live drums and guitar, and wicked basslines straight out of the P-Funk era. The Kansas-born brothers' 2015 album was called Do Your Thing and fans are happy to comply at their performances, losing themselves in the pair's groove-heavy productions and hyperkinetic visuals. EDM producer and saxophone wunderkind Griz is joining The Floozies on select dates of their 2015 touring schedule, juicing up the brothers already-electric sets with his epic sax playing and infectious energy.

Producer/guitarist Matt Hill and drummer Mark Hill were raised on a steady diet of funk music in their parents' Lawrence, KS home. In the late '00s they performed their first show in the family basement, and the warm response they received encouraged them to form The Floozies soon after. They made their debut in 2011 with Under Another Sun, a funky collection of retro-inspired dance tunes that reflected a wide range of influences. In 2012 they grew their fanbase further with two exceptional EPs -- At Dusk We Launch and Sunroof Cadillac -- and a series of adrenaline-filled performances on tour. Their slick productions and electrifying performances caught the attention of EDM heavyweight Griz, and in early 2014 The Floozies released the Tell Your Mother LP on his label Liberated Music. That floor-filling slice of electro goodness was quickly followed up by 2015's Do Your Thing, another stellar album that has fans dying to see the brothers on tour.