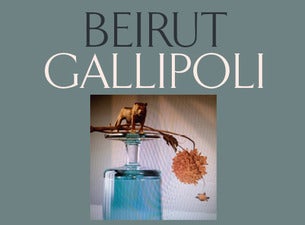 Beirut combines orchestral pop with world music to create intriguingly complex songs that are also infectiously catchy. Bandleader Zach Condon helms everything from vocals to flugelhorn to bring a uniquely diverse sonic palette into each sugary-sweet pop confection. In concert he surrounds himself with top-notch musicians, who infuse the band's indie rock sounds with eclectic folk instrumentation. By incorporating so many different influences, Beirut makes their concerts feel like a globe-trotting adventure for ticket buyers, who can’t help but sing along to familiar favorites like “Elephant Gun” and “East Harlem”.

Zach Condon was born in Albuquerque, NM in 1986 and raised predominantly in neighboring Santa Fe. Though his experience in jazz band taught him how to play trumpet and helped him gain an appreciation for complex musical expression, Condon dropped out of high school at 17. The budding prodigy was exposed to the diverse musical traditions of Europe on a soul-searching trip abroad, and he immediately began incorporating a wide range of international styles into his home recordings. Adopting the moniker Beirut, he released a collection of demos as his first full-length album Gulag Orkestar in 2006. The record became a surprise hit following the viral success of the music video “Elephant Gun”, leading Condon to put together a live band for an impromptu tour. The lineup stuck, and the group’s 2011 album The Rip Tide converted an entirely new segment of fans when the single “East Harlem” was featured on Pitchfork’s Best New Tracks. After a period of intense personal issues, Condon thrilled fans in 2015 with the announcement of Beirut’s fifth album No No No. As they continue to tour the world, Beirut seems destined to absorb the musical influences of every place they visit, incorporating each new sound into their signature chamber pop masterpieces.