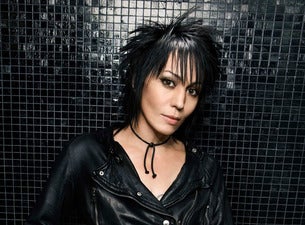 JOAN JETT AND THE BLACKHEARTS IN CONCERT:

Considering the glowing praise of everyone who has ever seen her perform live, it's hard to believe Joan Jett ever had a "Bad Reputation." With her jet-black hair and punk attitude, Jett became one of rock's most iconic frontwomen in the early '80s, blowing up charts around the world with muscular hits like "I Love Rock 'n' Roll" and "Crimson and Clover." Since then, she hasn't lost a beat, continuing to bring the same mix of talent and sheer ferocity to her adrenalin-filled live shows. Riding high off the 2013 release Unvarnished, Jett and the Blackhearts have fans eagerly awaiting their upcoming tour dates.

Born in suburban Philadelphia, Joan Marie Larkin, a.k.a. Joan Jett, got her first guitar when she was 14. Shortly after ditching guitar lessons because her teacher would only teach her folk songs, Jett's family moved to suburban Los Angeles, where she would immerse herself in the city's glam rock scene. In 1975 she formed the Runaways, an all-female hard rock band that skyrocketed to international success in the late '70s with brazen, heavy-hitting singles like "Cherry Bomb." After the band's dissolution in 1979, Jett launched her solo career, eventually eclipsing the fame of her former band when she joined forces with the Blackhearts for a string of early '80s smashes that included 1981's epochal "I Love Rock 'n' Roll." More than three decades later, Jett continues to thrill fans with her infectious energy and perennial touring.

"Joan Jett & the Blackhearts continue to amaze, their performance was incredible. Joan blew the roof of the joint!"

"She played all of her classics along with the incredible new stuff. She was full energy from start to finish. I love it when an artist seems to be enjoying the concert as much as I am."

"Joan Jett was amazing, did all the best songs from her Greatest Hits, each one just perfect! She nailed it, tore the house down! And the Blackhearts... what can ya say??? They too were perfect, pounding it out, especially the insane drummer... non-stop, breathtaking!"