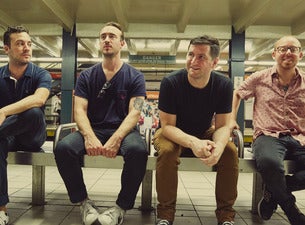 THE MENZINGERS IN CONCERT:

Punk-rock quartet the Menzingers has developed a strong cult following since debuting in 2007 with A Lesson in the Abuse of Information Technology. With their driving guitars, infectious energy, and commanding stage presence, the Menzingers put on one killer performance after the next for new fans and diehards alike. Whether they're tearing through some of their earlier fan-favorites or belting out tracks like "Where Your Heartache Exists" from 2014's Rented World, the Menzingers will have concertgoers headbanging all night on their Rented World Summer Tour 2014 alongside Lemuria, Pup, and Cayetana.

The Menzingers formed in the small town of Scranton, Pennsylvania, when members from Bob and the Sagets and Kos Mos merged to create a new punk sound. After the release of their 2007 debut A Lesson in the Abuse of Information Technology, the Menzingers boosted their already-growing reputation with several adrenaline-filled tours.. Since then the band has released three more popular albums, including 2014's Rented World, secured opening spots for Anti-Flag and Against Me!, and become staples in the punk-rock scene. One of the latest and greatest acts in the genre, the Menzingers continue to treat lucky ticket buyers to powerful sets on their hard-hitting tours.