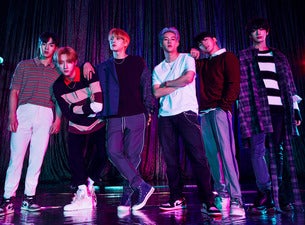 MONSTA X brings some of K-pop's edgiest energy to the table with undeniable swagger in songs that prowl around EDM and rap, yet always return to the safety of boy band harmonies. Known for their outstanding stage effects and backing dancers, MONSTA X devote their tours to their Monbebe (fans), and those same fans richly reward them with sold-out shows and deafening chants during concerts. They've cut across the language barrier, too: Stage conversation is instantly translated during live shows, so fans get access to the band members' thoughts — and sense of humor — in real time. The group has conducted two Asian tours, 2016–17's The First Live X-Clan Origins Tour and the Japan First Live Tour Piece in 2018. They embarked on their first world tour, Beautiful, in 2017, followed by The Connect Tour in 2018 and We Are Here Tour in 2019.

The group were formed by Starship Entertainment in 2015 during the reality show competition NO.MERCY, and they peddled their glitchy, tough sound right out of the gate with the title track off their first 2015 EP, Trespass. True to the K-pop playbook, they have released a pile of EPs, starting with Trespass and Rush in 2015, followed by The Clan Pt. 1 Lost and The Clan Pt. 2 Guilty in 2016, The Code in 2017 and The Connect: Dejavu in 2018. Unlike many bands, however, they've also released quite a few full-length albums, including 2017's The Clan Pt. 2.5: The Final Chapter, 2018's Piece and Take.1 Are You There? as well as 2019's Take.2 We Are Here. They are confident, persuasive rappers in songs like "Hero" or 2017's "Beautiful," but they also craft more suave material in songs like "Play It Cool." In 2017, the group launched their own variety show called MONSTA X-Ray while continuing to mop up a slew of awards.

MONSTA X has attracted a massive international fan base with their array of hit singles and tours, including a sold out U.S. arena outing in 2019. Their highly anticipated 2020 tour kicks off June 2 in Minneapolis and visits arenas and theaters across the U.S. and Canada including Boston, Toronto, Phoenix, Ft. Lauderdale and more before culminating with a colossal show at The Forum in Los Angeles.

MONSTA X has taken the U.S. by storm with a list of hits permeating the air waves including the fifth single, "Middle of the Night," from their upcoming album All About Luv which isset for a Valentine's Day release. All About Luv will be the first all English-language album released by a K-pop group. Additionally, "WHO DO U LOVE?" positioned them as "only the second K-Pop group ever to enter the Top 40 Airplay Chart." With a historic performance at Life Is Beautiful in Las Vegas, they emerged as "the first male K-Pop group to perform at a major music festival in the United States," and stood out as the first K-pop group in history to hit the stage at iHeartRadio Music Festival the same day. Additionally, they made their United States television debut on Good Morning America, followed by electric performances on Jimmy Kimmel Live! and The Ellen DeGeneres Show and became the "first K-pop group to perform on the Teen Choice Awards." MONSTA X also charted on the Billboard Social 50 for over a year, remaining one of the biggest social media bands in the world.