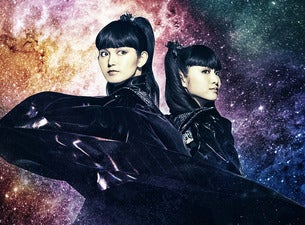 They call it "kawaii" metal ("cute" metal in Japanese) and the concept is so ludicrous it could only have come from the bizarre, wonderful subculture factory that is Japan. BABYMETAL features two (formerly three) diminutive teen girls singing pop songs — in front of a band of middle-aged heavy metal musicians. It shouldn't work, but it really, really does. Singers Su-metal, Moametal and, originally, Yuimetal are so small that they sometimes stand on boxes onstage, dressed in matching dresses that are part baby-doll, part medieval fantasy. It is a surreal and amazing sight — but for all the novelty, these ladies are surprisingly commanding. Their music is a study in delightful contrasts, melding girlish pop with guitar heroics and satisfyingly heavy rock. The group took the world by storm on their first BABYMETAL World Tour in 2014, and they were impressive enough to be invited to open for Lady Gaga during her 2014 ArtRave: The Artpop Ball tour. After their BABYMETAL World Tour 2016: Legend Metal Resistance, they were invited to support none other than Metallica the next year. In 2019, they undertook their first-ever U.S. headlining tour, supported by Swedish metal act Avatar.

Before joining the pre-fab band, BABYMETAL's singers had no idea what heavy metal even was. One singer, Yuimetal, admits she's never been in a mosh pit, and thinks she'd be "smashed to bits." Instead, singers Su-metal, Yuimetal and Moametal were all part of Sakura Gakuin, a group of junior high school girls chasing fame in Japan's lucrative "idol pop" industry. That industry is all about cultivating an image of innocence, but it can be hard to stand out; producer Kobametal originally imagined BABYMETAL as a subgroup of Sakura Gakuin that would distinguish the main group. But BABYMETAL quickly took on a life of their own, and in early 2014 the group released their first self-titled album to acclaim, climbing metal charts around the world thanks in no small part to the breakout single "Gimme Chocolate!" In 2016, the band released their second album, Metal Resistance and became the first Japanese group to headline Wembley Arena. Metalheads have embraced the group, who have been welcomed at major metal festivals. They even performed "Gimme Chocolate!" on the The Late Show with Stephen Colbert. Yuimetal left the group in late 2018, but that hasn't slowed the band's momentum.