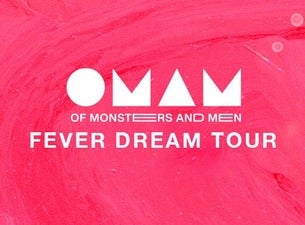 Boletos para Of Monsters and Men

Acerca de Of Monsters and Men

Icelandic six-piece Of Monsters and Men have delighted audiences around the world with their uplifting English folk-pop sound, full of soaring harmonies and captivating melodies. The monster hit “Little Talks” was many fans’ introduction to the band – it was certified Platinum in the US, reaching No. 1 on the US Alternative chart. 2013 saw the band wowing ticket buyers at live concerts and festivals, showing they’re just as talented on stage as in the recording studio. Formed in 2010, the band met with success quickly, winning Iceland’s annual band competition Músíktilraunir later that year. In 2011, Of Monsters and Men signed to Record Records and released the Into the Woods EP. Their debut album My Head is an Animal was released in Iceland in September 2011 and in the US in April 2012 by the Universal Music Group. The album – full of  acoustically driven, infectiously energetic folk-rock – peaked at No. 6 on the US Billboard 200 album chart and reached the top 5 in Australia, Canada, Germany, and the UK.